Having a state child care tax credit that New Jersey parents could claim on their tax returns would help lift many families out of poverty, according to one child advocate. But right now, the Garden State is one of a handful of states that don't offer the option. 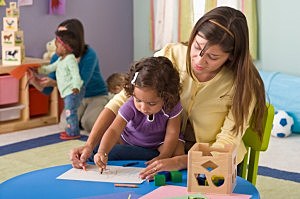 Cecilia Zalkind, executive director of Advocates for Children of New Jersey, believes the tax would be beneficial because parents could seek full-time employment without worrying that their earnings will be swallowed up by child care costs. A similar tax exists on the federal level, but is not available to New Jersey families.

Low and middle-income families in New Jersey could get a boost and some financial assistance with the tax credit because the average low-income family spends 25 percent of its income on child care, and for many families it's more than that, Zalkind said.

"I think this is an issue worth exploring in New Jersey. There are two barriers: one is the will to do and two is the money," Zalkind said.

There is legislation (A-483) in New Jersey that would provide for a tax credit under the corporation business tax for certain corporate taxpayer's support of a licensed child care service for their employees' kids. The credit is equal to 25 percent of expenses incurred. The bill was introduced in January of 2014 and has been stalled without ever getting a public committee hearing.